July 7th, 2017
Briefing with members of the Core Group and Civil Society on Adoption of Nuclear Weapons Ban Treaty 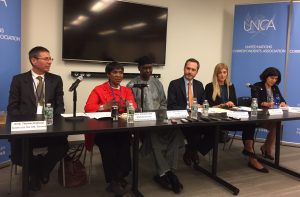 The United Nations Correspondents Association held a press briefing on Friday, July 7th with members of the UN Core Group (South Africa, Brazil, Austria, Nigeria) joined by delegates from the International Community of the Red Cross (ICRC) and the International Campaign to Abolish Nuclear Weapons (ICAN) on the adoption of the Treaty on the Prohibition of Nuclear Weapons.

Delegates from the Core Group and Civil Society included:

Statement from the Core Group:

The Core Group was instrumental in the processes that led to the convening the UN Nuclear Ban Treaty Conference.  Civil society as well as international organisations played a very active role in the process.The UN Conference to ban nuclear weapons, was in session since 15 June 2017, and concluded its work on Friday, 7 July 2017. The most important outcome of the Conference is the adoption of a treaty banning nuclear weapons. This is a historic milestone in the area of disarmament and indeed the whole world as it is the first time that nuclear weapons will be explicitly prohibited. 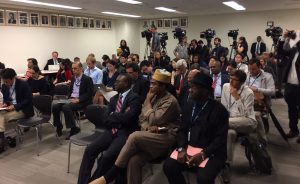 Ugly politics, but a tried and tested business model for more than 20 years - also a sign of where Australian conservative politics could heading after this election….. twitter.com/peterdutton_mp…

People smugglers have obviously decided who is going to win the election and the boats have already started.https://t.co/8ZMGfrh8Ne