May 22nd, 2018
Film Screening of “The Journey is the Destination” on the life of Reuters photojournalist Dan Eldon

The United Nations Correspondents Association hosted a special screening of the feature film The Journey is the Destination about the life of Reuters photojournalist Dan Eldon.

The screening was followed by a conversation with director Bronwen Hughes, producer Kathy Eldon and LA Times photographer Carolyn Cole.

BIOS and more information on the film and Dan Eldon below. 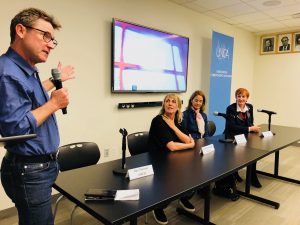 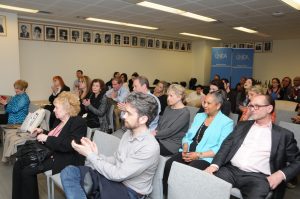 “The Journey is the Destination“ tells the story of how Dan Eldon, an artist, explorer and photographer, led a group of unlikely teens on a rollicking safari across Africa to deliver aid to a refugee camp in Malawi in 1990.  Christopher Nolan (Director of Dunkirk), Jeff Gettleman (NY Times Bureau Chief for East Asia), and Elinor Tatum, (Publisher of the Amsterdam News) were among the kids for whom the journey was a transformative experience in their young lives.The film then follows Dan as he finds himself covering a famine and spiraling civil war in Somalia as the youngest photojournalist ever to work on the frontlines for Reuters.

Although set in 1990,  Journey highlights contemporary issues around refugees caught in the midst of a civil war, the radicalization of youth, the role of journalists in peace and war and how youth can make an effective difference in the world around them.Ultimately, Journey celebrates the vibrant and fulfilling life that is possible when we commit to live, not only for ourselves, but also for others.

Starring Maria Bello as Kathy Eldon and New York actor Ben Schnetzer as her son Dan, Journey was first launched at the Toronto International Film Festival and has won multiple awards at festivals since then. The film, whose New York premiere was hosted by the Overseas Press Club and the Committee to Protect Journalists, is also currently available on Netflix.

Kathy’s foundation, Creative Visions, is dedicated to “using the power of media to create awareness of critical issues and catalyze positive change,” and is using the film to ignite Connection is the Solution, a global movement to inspire individuals to believe they have a role to play in the issues they care about through creative activism. 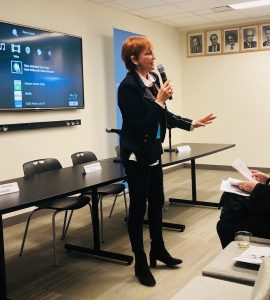 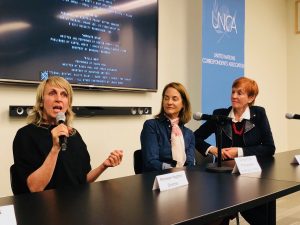 KATHY ELDON
Born in Cedar Rapids, Iowa, and a graduate of Wellesley College, Kathy Eldon has worked as a teacher, journalist, author, and film and television producer in England, Africa and the United States. Kathy is the founder of Creative Visions, a 501 (c) 3 organization that supports “creative activists” who use media and the arts for social impact. CV has incubated more than 260 projects and productions on five continents, impacting over 100 million people. Creative Visions was inspired by the life of Kathy’s son, Dan Eldon – artist, adventurer and activist – who was killed in 1993 while on assignment for Reuters in Somalia.

BRONWEN HUGHES
Born in Toronto, Ontario, Canada, Bronwen Hughes is a New York and Los Angeles-based film director, and graduate of NYU’s Department of Film. “The Journey is the Destination” is her fourth feature film. Her previous films include “Forces of Nature,” “Harriet the Spy” and “Stander,” for which she was nominated for Best Director at the 25th Annual Genie Awards. Hughes has also directed a number of television projects, including episodes of “Breaking Bad,” “Hung,” “The L-Word,” “White Collar,” “Fairly Legal,” “Motive,” “Queen of the South,” “Berlin Station,” “Hawaii Five-0,” “The Good Doctor,” and “The Resident.”

CAROLYN COLE
Born in Boulder, Colorado and a graduate of the University of Texas in Austin, Carolyn Cole also earned her masters degree from the School of Visual Communication from the Scripps College of Communications at Ohio University.  Cole has been a feature photographer for the Los Angeles Times since 1994, capturing images of nations and international events over the past 14 years while covering assignments in Africa, the Middle East, New York and California. She won the Pulitzer Prize for Feature Photography in 2004 for her coverage of the siege of Monrovia, Liberia in 2003