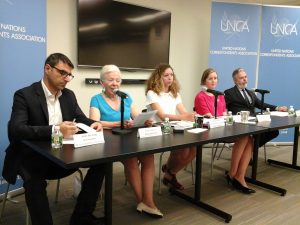 The UN Correspondents Association held a press conference on Friday, September 2nd in the UNCA briefing room, with two researchers at the Centre for International Studies and Diplomacy at the University of London’s School of Oriental and African Studies (SOAS),  Elise Dietrichson and Fatima Sator, on their recent report titled “Women and the U.N. Charter – A Southern Legacy.”

The press conference was moderated by Edith Lederer, Associated Press, with the participation of Ambassador Antonio de Aguiar Patriota, Permanent Representative of Brazil to the United Nations.

Below is more information about the report provided by CISD, SOAS. 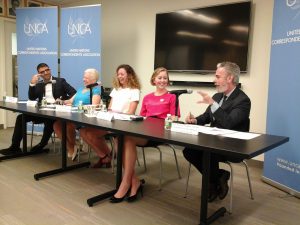 Two researchers at the Centre for International Studies and Diplomacy at the University of London’s School of Oriental and African Studies (SOAS), Fatima Sator and Elise Luhr Dietrichson, found some fascinating results when they investigated how gender equality got into the U.N. Charter.

Current thinking would lead you to believe that Western delegates were responsible for getting women’s right in the U.N. Charter – but they weren’t. On the contrary, the American and British women delegates and advisors directly opposed several of the amendments that would ensure the rights of women in the Charter.

However, this contribution of the global South in the founding of the UN has generally been ignored and neglected. Fatima Sator and Elise Dietrichson will discuss what they found which points to “Women and the U.N. Charter – A Southern Legacy.”

As the next Secretary-General selection is approaching, the two researchers highlight that it is more than important to acknowledge the achievement and the role of these women in order to set the record straight and promote empowerment.

For more information:
Gender Equality in the UN Charter: How did it get there? Does this matter today?

Fatima Sator is a research assistant from the School of Oriental and African Studies. She has a Master’s in International Studies and Diplomacy from SOAS and a Master’s in Journalism from the University of Neuchâtel in Switzerland. Born in Algeria, she has been focusing on Women’s role in the Arab world prior to her research on Women and the UN Charter.
She has previously worked as a journalist for different Swiss media and is currently working as a communication officer at the UN in Geneva.

Elise Luhr Dietrichson from Norway has a bachelor in Development studies, parts of her studies were based in Vietnam and India. She has experience form working at the UN Women Nordic Liaison office and the Norwegian embassy in Latvia. She has a master in International Studies and Diplomacy from SOAS, School of Oriental and African Studies, where she currently also works as research assistant. She just moved back to Norway to work in the Norwegian Resource Bank for Democracy and Human Rights.