June 12th, 2015
UNCA Press Conference with lawyers from Roads of Success on victims of persecution from ISIS captivity and advancing religious minorities and women’s rights across the Middle East 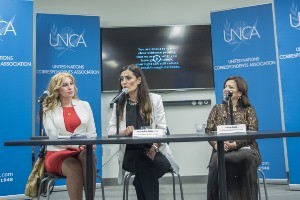 On Tuesday, June 9th, the U.N. Correspondents Association held a press conference with lawyers from Roads of Success on victims of persecution from ISIS captivity and advancing religious minorities and women’s rights across the Middle East.

Roads of Success is dedicated to supporting victims of crisis and; advancing religious minorities’ and women’s rights across the Middle East.

Jacqueline Isaac recently testified at the U.S. Congressional Foreign Affairs Committee on her visits to Iraq, sharing heart-wrenching and heroic stories. Since the emergence of ISIS, Yvette and Jacqueline Isaac have traveled to Iraq several times. Their missions have included: (1) trucking medical supplies and basic necessities through the warring zones and distributing the items to internally displaced persons in camps where survivors crowd into tents, abandoned buildings and to Yazidis on top of the Sinjar mountain; (2) holding workshops in an effort to heal, restore and empower the girls who have been raped and tortured while in ISIS captivity, and (3) spending time on the front-lines, witnessing the needs on the ground.

#US Urges #Israelis, #Palestinians to Calm Tensions Ahead of #Biden Visit  voanews.com/a/us-urges-isr…

Zelensky asks for Western help to push Russia out of Ukraine by year end Ukrainian president’s appeal to the G-7 comes as the group’s leaders float new sanctions against Moscow wsj.com/articles/g-7-e…

ارتفاع عدد حالات الوفاة جراء تسرب غاز سام في مدينة العقبة إلى 10، فيما ارتفع عدد الاصابات إلى نحو 251. The death toll from a poison gas leak in the city of Aqaba has risen to 10, while the number of injuries has risen to about 251.

Shackled and looking wary, @WNBA star #BrittneyGriner was ordered to stand trial Friday by a court near Moscow, about 4 1/2 months after her arrest at an airport while returning to play for a Russian team. apnews.com/article/russia…

.@UN_Spokesperson says civilian infrastructure should never be targeted. "Any attack that hits a shopping mall is utterly deplorable." #Ukraine twitter.com/DmytroKuleba/s…

Large shopping mall in Kremenchuk with hundreds of civilians inside has been hit by a Russian strike. Russia is a disgrace to humanity and it must face consequences. The response should be more heavy arms for Ukraine, more sanctions on Russia, and more businesses leaving Russia. pic.twitter.com/Uvi6fbyShK

Israel’s killing of #ShireenAbuAkleh is again prominent in UN Security Council’s Middle East discussions. China was particularly strong, calling for a criminal investigation and an explanation as to why she was shot from Israel.