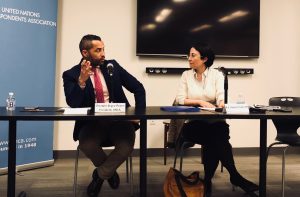 The United Nations Correspondents Association held a press briefing on Friday, April 6th with Her Excellency Ms. Haneen Zoabi, Member of Israeli Knesset from the Arab joint list, who was in the US participating in a speaking tour.

Haneen is serving in the Knesset since 2009 and was the first Arab woman to be elected to Israel’s parliament on an Arab party’s list representing the Balad party. She was elected in 2013 as a member of the “Joint List”

Read her BIO for more details